Hugh Laurie:Playing House was a nightmare says Hugh Laurie (who made £250,000 an episode) (DAILY MAIL) 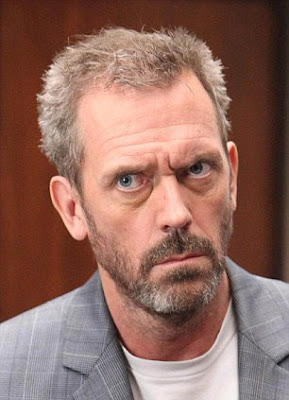 He had one of the best jobs in Hollywood, picking up an estimated £250,000 an episode and a clutch of coveted TV awards along the way.

But it seems that Hugh Laurie was every bit as hard to please as his fictional alter-ego, the grumpy Dr Gregory House.

The British actor today sets out the full depth of the despair he felt while filming his hit TV series House.

Laurie, 53, says he found his filming commitments so bleak that he hoped to have an accident on the way to the studio just to earn a few days rest.

His starring role as Dr House made him one of the highest-paid TV actors of all time.

But in an interview he says: ‘[It was] a gilded cage. At this distance it all sounds absurd.

Ridiculous. After all, what was I doing other than playing about, telling stories with a very nice bunchof people? What could be constricting about that?

Posted by Karen V. Wasylowski at 8:37 AM