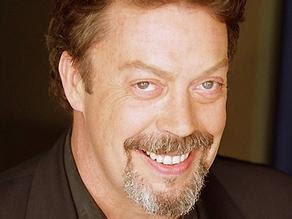 Rocky Horror Show actor Tim Curry is recovering after suffering a major stroke at his home in Los Angeles.

The British star, 67, is said to be 'doing great' following the collapse.

Curry rose to fame as Dr. Frank-N-Furter in the cult musical and went on to a successful stage and film career.

Few details were available about the stroke last night, but sources close to the actor refused suggestions that the stroke had made it difficult for him to speak.

'He absolutely can speak and is recovering at this time and in great humour', she added.

Unmarried, he lives in the Hollywood Hills in a Spanish colonial-style villa.

READ MORE: http://www.lex18.com/news/actor-tim-curry-suffers-major-stroke
Posted by Karen V. Wasylowski at 11:23 AM

I hated hearing that Tim Curry had a stroke. I love his sense of humor which makes him one of my favorites.