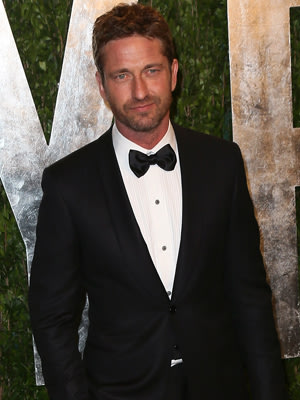 Gerard Butler is a man of many talents — like acting, and singing, and cracking walnuts with his butt.

No, that wasn't a misprint. The thesp delighted a (seriously enthused) German audience on the popular show "Wetten, Dass…?" when he agreed to imitate a guest performer who had crushed a long line of walnuts using only his derriere.

The "Olympus Has Fallen" star was hesitant at first, but the show's host persisted. Eventually, Butler sucked it up and agreed to give it his best shot.

And it turns out Butler's best shot was pretty darn good. Proving he has buns of steel, the heartthrob crouched down and dropped onto a walnut. It took him two tries, but he successfully cracked that sucker like a pro.

(Note: Technically, there are no professional butt-walnut-crackers. We checked.)

At this point in the taping, Butler was pretty pleased with himself — and can you blame him? But the host wasn't done with the star just yet.

During his interview on the couch, Butler somehow got into telling a story about a movie role that required him to pour ice down his pants. Of course, this gave the host a great idea. He presented Butler with a bucket of ice and asked him to reenact the scene!

Trying to backtrack, Butler explained that he had worn a wetsuit under his clothes during the shooting, but it was too late. The audience was cheering and Butler couldn't say no, so he did what any actor in his position would do.