Why has Downton Abbey actor Rob-James Collier shaved all of his hair off? 11 Jun 2013 15:22 Former Corrie actor who plays Thomas Barrow has lost his locks (MIRROR)

Only last month, Downton Abbey actress Michelle Dockery revealed that filming for the fourth series was “almost halfway” in the can.

The 36-year-old former Corrie actor was in attendance for an 'Evening with Downton Abbey' in North Hollywood last night – with his severe new do raising questions what could happen to scheming below-stairs member of staff, should production still be ongoing. 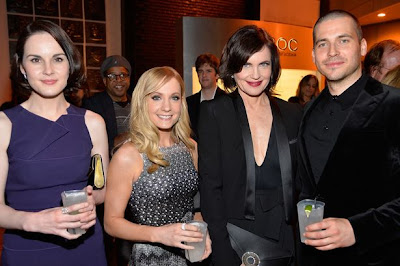 It was reported last month that former model Rob was in the running to play the lead role for the BBC's remake of costume drama Poldark .

Check out all the latest News, Sport & Celeb gossip at Mirror.co.uk http://www.mirror.co.uk/tv/tv-news/downton-abbey-actor-rob-james-collier-1946191#ixzz2W6Vja61t
Follow us: @DailyMirror on Twitter | DailyMirror on Facebook
Posted by Karen V. Wasylowski at 9:50 AM