They are both supreme beings who obviously excel at their crafts, AND they both happen to be sweeter than buttercream frosting!

In fact, Adele is SO taken with Jennifer that she's encouraging the actress to MOVE to a house near her home in Notting Hill when the X-Men sequel starts filming in London later this year! 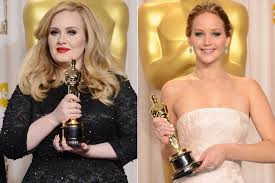 "Adele’s been hanging around with Jennifer Lawrence since the Oscars. Jennifer’s set to come to London later this year to film an X-Men movie and Adele’s recommending she move to Notting Hill, where she has a house."

SO excited to witness this intimidating friendship blossom into the most beautiful of flowers!
Perhaps they can even team up on an (inevitably) award-winning movie!

READ MORE: http://perezhilton.com/2013-03-11-adele-jennifer-lawrence-new-best-friend-move-notthing-hill#.Ua33rEAp_3M
Posted by Karen V. Wasylowski at 10:23 AM