The Hobbit:The Desolation of Smaug continues to do astonishing business around the country and locally at the UA Southampton 4, where it is playing in both 3-D and 2-D formats.  It’s my contention that sex appeal is a major reason for its success. For those attracted sexy actresses, the second part of Peter Jackson’s epic adaptation of J.R.R. Tolkien’s slim fantasy classic introduces Lost’s lovely Evangeline Lilly as a female elf who is not in the book. 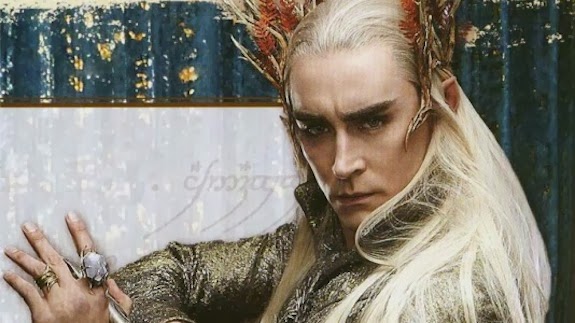 For those attracted to hunky actors, there are three that will grab their attention: Lee Pace (right), who plays Thranduil, the Elvenking; Richard Armitage (above), who plays Thorin Oakenshield, the leader of the dwarves on the epic journey to reclaim the Lonely Mountain from the dragon Smaug; and Orlando Bloom, who was so appealing as Thranduil’s elf son Legolas in Jackson’s Rings trilogy that the director inserted the character into his new film although he isn’t in Tolkein’s book.  For the Australian magazine FilmInk, I participated in an international press day with the threesome several months ago in New York City. Last time, I posted a roundtable with Orlando Bloom. As promised, here are the roundtables with Pace and Armitage. I note my questions.

Danny Peary: I think Thorin Oakenshield is the tragic hero of Tolkien’s story, a flawed  Shakespearean hero. Did you see it that way too??

Richard Armitage: Yes, it sort of evolved that way; I didn’t really come into it with that being his journey. I used the book a lot to build the character. But there were moments when I did look to Shakespeare for ideas and inspiration, and that’s somewhere in my portrayal . He’s complicated and complex.  He is heroic with honor and nobility, despite his shortcomings, cantankerous nature, and stubbornness. I think we need to see him in the first half of the story as a hero.  He will later be corrupted and spiral down, so it’s essential to give him some heroism at the forefront.

Q: Perhaps you get to release your inner anger playing an angry character??

RA: I don’t think dwarves in general are angry but they do have a lot to be angry about. They've been wronged a lot, particularly in this story. From the minute you meet these characters, they’re on their front feet, because they've been wronged and they have this quest they need to do.  I was never playing a dwarf in a state of relaxation. Who is Thorin when he’s chilling out at home?  I can’t imagine him not being at war.  The dwarves are always on that energy level. I experienced it myself filming the third movie, because we were shooting some of the battle scenes and fighting at a level of rage that I’ve never done before.  I was adrenalized and swinging swords around, and I found myself–the placid person that I am–very angry all the time. I think that that’s how these dwarves must live their lives, because they’re always ready for war. That’s what expect of them because they’re provoked repeatedly, all the time. In this story they’re on their quest to the mountain, to Erebor, for their lost gold and to reclaim their kingdom.  But one of the complexities of the second film is that they know there is a dragon, Smaug, there to repel them. Thorin wants to get inside the door but he knows that once he gets in he’s going to be facing the most horrific thing that he or his people have ever experienced. I think one of the most interesting scenes that I play in the second movie is when they finally open the door to Erebor and Thorin breathes the air again of his childhood. It’s this weird sort of sense memory. He remembers all these things that happened to him.  But at the same time he can smell the dragon and the dragon can smell him. It’s quite a moving scene, because only three of the dwarves are there when the dragon attacks. It’s very potent for him and the three dwarves with him when they finally open the door, because it’s been talked about for so long and it’s been years in the planning.  They finally get there and it’s a very emotional scene. And the dragon attacks.  It’s sort of the beginning of a downward spiral that you’re going to see in movie three.

Q: Do you find it strange that you are over six feet tall and playing a dwarf?

RA: I’ve never really found it that strange, I just get used to it. We were made much bigger than ourselves so when the computer does what it does it’s of no interest to me. It’s just important that we don’t look like children. I do get hot around the collar when I go to do voice dubbing and then see how small the dwarves are in the films. I don’t like seeing them reduced, because I think dwarves have quite big egos. It’s good that I have that reaction, because it means that I understand what it means to them to be formidable.

Q: How was doing the scenes with the dragon?

RA: During the entire shoot it was just a green ball on a stick, which is staggering. Occasionally an assistant director would walk around holding the stick. So you look at the ball, but mentally you try to create the face of the dragon. They’d show you a picture of the dragon – this is what it looks like. Three weeks later they’d go, we've completely changed it, and now it looks like this. So I decided I was going to create my own dragon in my mind. What I created didn’t even look like a dragon, it was just kind of a weird beast.

Q: So you never acted with Benedict Cumberbatch, doing motion-capture work as Smaug?

RA: Luckily toward the end, after we’d shot everything else, I did get to work with him. He was doing some voice work in the studio, and I came in to do something with him, so I actually worked face-to-face with him, which is good. I wish it had been at the beginning. I heard his voice, and the good thing is that I could then go back and re-voice some of those scenes with that sense inside of me. One of the good things about doing post-production sound is that you can just invest your part with a new essence.