In "The Voorman Problem," Martin Freeman (right) is a psychologist sent to interview an inmate (played by Tom Hollander) who says he is God.


Two great reasons to see The Oscar-Nominated Short Films 2014: Live Action - one dark and funny and wickedly existential, the other a nail-biter of a domestic drama, filled with dread.


The former stars Martin Freeman, alias Bilbo Baggins, alias Dr. John Watson (opposite that Caldecott Bumbershoot fellow in PBS's Sherlock). In the British short "The Voorman Problem," Freeman plays a psychologist dispatched to interview a prisoner who claims he is God. The warden needs certification to put him away. Problem? His fellow inmates have come to believe that the straitjacketed Voorman (Tom Hollander) is indeed who he claims to be. 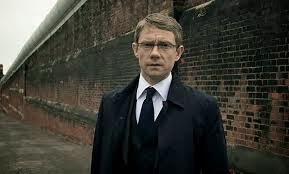