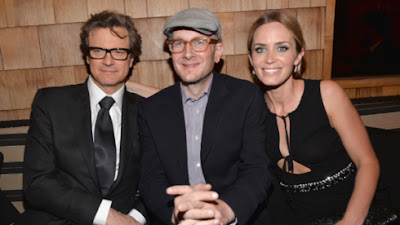 Tragicomedy made L.A. debut on April 18

“The ultimate message,” said helmer Dante Ariola, “is that you can take on other identities, but in the end you gotta own up to who you really are.”

Such is the thrust of Cinedigm’s “Arthur Newman,” which made its L.A. preem April 18 at Hollywood’s ArcLight. Pic follows a failed golfer (Colin Firth), who fakes his death, changes his name and hits the road to reinvent himself. Cast and crew, as well as other celebs, walked a bite-sized red carpet before the screening — and proved that even Hollywood’s rich and famous entertain fantasies of escape and reinvention.

Blunt and Firth pair up in the tragicomedy and break into people’s houses to pose as the owners — who range, in character, from hipster to wealthy to geriatric.

“My life has been that, in a way,” Firth said. “To do something as unrealistic as acting is that in itself. In some ways, I don’t really have as strong an instinct to actually escape from my life as perhaps some people do, because I do it so regularly. I mean, every time I do a film or a play or whatever it is, it’s an excursion away from reality.”

Email ThisBlogThis!Share to TwitterShare to FacebookShare to Pinterest
Labels: anne heche, arthur newman, before I go to sleep, dante ariola, Emily Blunt, Salmon Fishing in the Yemen, The Kings Speech, the railway man, the young victoria