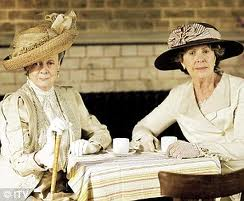 Brace yourselves, "Downton Abbey" fans: "Downton Abbey" Season 4 won't premiere in the US for another year. Yes, it's the usual wait time for the new adventures of the Crawley family, even though the UK will get new eight episodes in the fall of 2013.

S4 of #DowntonAbbey will show up in January 2014 on@masterpiecepbs. #TCA13 #DowntonPBS
January 15, 2013 6:18 pm via Twitter for iPad Reply Retweet Favorite
In December, PBS was considering airing "Downton" in the US closer to when it airs in the UK. “The audiences for 'Downton' have been terrific,” senior VP and PBS’ chief programming executive John Wilson told THR. “So you can’t say that [airing months earlier in the UK] has knocked the legs out from underneath 'Downton Abbey.' On the other hand, we can’t know how much more terrific it might have been had it aired closer to the UK premiere."