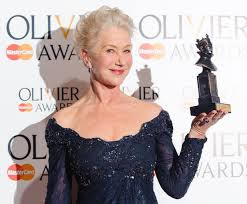 LONDON (AP) -- Helen Mirren was crowned queen of the London stage at the Olivier Awards Sunday, while compelling, canine-titled teen drama "The Curious Incident of the Dog in the Night-Time" emerged as best in show with seven trophies.

Mirren, 67, was a popular and expected best actress choice for her regal yet vulnerable Queen Elizabeth II in "The Audience," Peter Morgan's behind-palace-doors drama about the relationship between Britain's queen and its prime ministers.

The actress, who won an Academy Award in 2007 for playing Britain's monarch in "The Queen," quipped that it was 87-year-old Elizabeth who deserved an award, "for the most consistent and committed performance of the 20th century, and probably the 21st century."

Backstage, it turned out she wasn't kidding. Mirren, who has been Olivier-nominated three times before, said that finally winning "doesn't mean that I was the best actor. There were so many incredible performances out there." 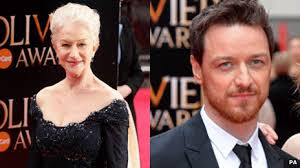 "I was making a joke about the queen winning, but I think actually it is a reflection of the kind of respect the queen is held in," she said.

Her "Audience" co-star, Richard McCabe, who won the supporting actor trophy for playing 1960s and 70s Prime Minister Harold Wilson, said Mirren was a joy to work with.

"It's important as an actor to be absolutely fearless, and she is," he said.

While the queen herself hasn't been to see the Stephen Daldry-directed show -- rumored to be Broadway-bound -- McCabe said "a lot of people in the royal household have been coming in and watching incognito, and they must be reporting back."

The surprise of the awards ceremony at London's Royal Opera House was "Curious Incident," an adaptation of Mark Haddon's best-selling young-adult novel about a teenage math prodigy with Asperger's Syndrome who sets out to find the killer of his neighbor's dog, with destabilizing results.

The show, which premiered at the state-subsidized National Theatre last year before transferring to a commercial West End playhouse, has won praise for its creative use of movement and technology to make the leap from page to stage.