Michael Fassbender’s a spectacular creature - set to star in “Twelve Years a Slave” with Brad Pitt Fassbender to work with A-Lister Brad Pitt on new project By Irish Voice Reporter, 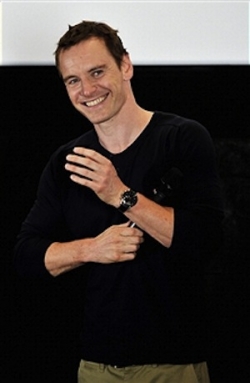 One of the big end of 2013 film releases, Twelve Years a Slave, stars  Brad Pitt and Irish/German actor Michael Fassbender, who supposedly  speaks in a pretty cool U.S. Southern accent for the part.

Fassbender, who recently finished shooting the indie flick Frank with Maggie Gyllenhaal in Ireland, received rave reviews from his other Slave co-star Sarah Paulson last week.  She told Vanity Fair magazine that the Co. Kerry-raised actor, who just turned 36, is a “spectacular creature,” something his many female fans have known since seeing him disrobe in Shame a couple of years ago!

“I play Michael Fassbender’s wife in the movie,” she said.  “He’s really the most spectacular creature. That was a pretty amazing job.

READ MORE OF THIS ARTICLE:http://www.irishcentral.com/ent/Michael-Fassbenders-a-spectacular-creature---set-to-star-in-Twelve-Years-a-Slave-with-Brad-Pitt-204502861.html