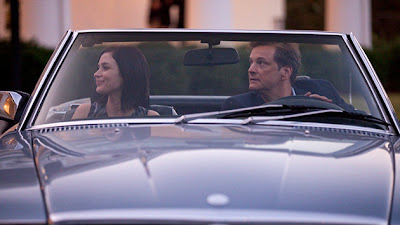 From the outside looking in Emily Blunt and Colin Firth are two of the most charming and likable actors working today. And not just because of their British accents, because of their talent, sound role selections and general good reputations in the moviemaking biz. That said, in knowing that the two have teamed up together in the movie "Arthur Newman," we might assume that they have put their collective charms together in order to bring the most naturally heartwarming and universally appealing characters ever to the big screen, but as it turns out it's quite the opposite.

"Arthur Newman" is the unconventional story of a middle-aged man (Firth) who after a series of disappointments and setbacks attempts to reinvent himself with a new identity. His plan is thwarted when he encounters an eccentric woman Mike (Blunt) with similar identity issues and they embark on an unplanned journey that involves pretending to be other people they meet along the way and an eventual romance. When Yahoo! Movies met up with Blunt and Firth recently to discuss the film they admitted, via a series of playful and often hilarious back-and-forth exchanges, that they reveled in the opportunity to play two seemingly unlikable people struggling with disappointment, awkwardness and identity crises.

"I wasn't looking for charm," Firth said when asked what made him take on the role. "[My character] is someone I think who would consider himself to be very disappointing in the charm department, hasn't impressed his wife or his girlfriend or his son or anybody and Mike makes a big deal of being unimpressed with him as well."


READ THE REST OF THE INTERVIEW HERE: http://movies.yahoo.com/blogs/movie-talk/exploring-delights-awkward-intimacy-arthur-newman-stars-emily-191023838.html