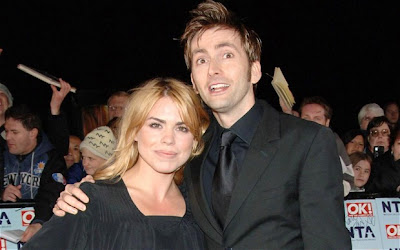 After months of speculation about which, if any, previous Doctor Who actors would return for the show's 50th anniversary episode, David Tennant alone has been confirmed.

The new issue of Doctor Who Magazine, out today, states: “Although David Tennant has returned to his role of the Tenth Doctor, the other old Doctors will not be taking part.”

The hour-long 3D episode, which will air in November, began filming in April. However, rumours in February suggested that all 11 Time Lords would be involved, with those who have died recreated using technology.

However, in April, the BBC released a statement confirming that Christopher Eccleston, who played the ninth doctor, would not be appearing despite having been in talks with Doctor Who writer Steven Moffat.

READ MORE: http://www.telegraph.co.uk/culture/tvandradio/doctor-who/10033112/Doctor-Who-50th-anniversary-David-Tennant-confirmed-as-only-returning-Doctor.html
Posted by Karen V. Wasylowski at 10:11 AM