MR DARCY is heading back to our screens – with rising star Matthew Rhys stepping into Colin Firth’s famous breeches. 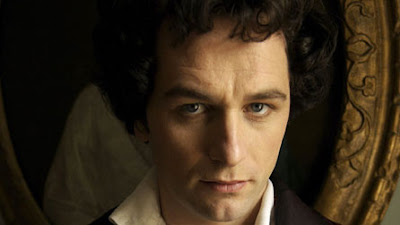 Eighteen years after Firth made millions of women swoon by climbing out of a lake with wet clothes clinging to his torso, his brooding character is returning to the BBC in an adaptation of Death Comes To Pemberley.

Based on a murder mystery novel by PD James, the series tells of events after Jane Austen’s Pride And Prejudice creations Darcy and Elizabeth Bennet have been married for six years.

Rhys, a 38-year-old Welshman, is already an emerging star in the US, where he plays an undercover KGB officer living in Washington in drama series The Americans.

READ MORE: http://www.express.co.uk/news/showbiz/402889/My-challenge-to-fill-Colin-Firth-s-breeches-by-new-Mr-Darcy
Posted by Karen V. Wasylowski at 11:28 AM

I'm a fan of both Matthew Rhys and Anna Maxwell Martin but, sorry, I really don't get these casting choices. Hopefully they will prove me wrong.