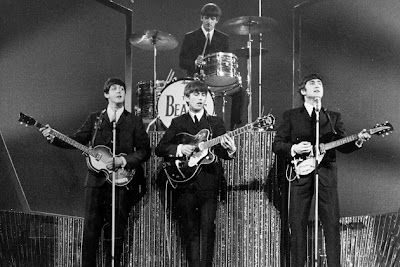 In Feb. 1963, John Lennon and Paul McCartney were sitting in the back of a tour bus, seeing if they could rise to the occasion. With ‘Please Please Me’ riding high on the British charts, producer George Martin had issued the Beatles’ budding songwriters a challenge: bring a new composition of equal quality to their next studio session.

Lennon and McCartney had penned ‘Thank You Girl’ at this point, but weren’t opposed to seeing if they could come up with something stronger. On Feb. 28, inspiration struck on the way to Shewsbury.


“The night Paul and I wrote ‘From Me to You,’ we were on the Helen Shapiro tour, on the coach, travelling from York to Shrewsbury,” Lennon remembered in ‘Anthology.’ “We weren’t taking ourselves seriously – just fooling around on the guitar – when we began to get a good melody line, and we really started to work at it. Before that journey was over, we’d completed the lyric, everything. I think the first line was mine and we took it from there.

“What puzzled us was why we’d thought of a name like ‘From Me to You.’ It had me thinking when I picked up the ‘NME’ to see how we were doing in the charts. Then I realized – we’d got the inspiration from reading a copy on the coach. Paul and I had been talking about one of the letters in the From You to Us column.”

Although Lennon and McCartney thought they had something worthwhile, not everyone on the bus agreed. Singer Kenny Lynch (also on the Helen Shapiro tour) tried to assist the boys with their writing, but gave up on them after hearing them put in a falsetto “Whoo!” “You can’t do that! You’ll sound like f—ing fairies,” he shouted. Of course, those high-pitched “whoos” would become an early trademark that the Fab Four employed again when composing their next hit single, ‘She Loves You.’

Email ThisBlogThis!Share to TwitterShare to FacebookShare to Pinterest
Labels: from me to you, george harrison, john lennon, lennon and mccartney, paul mccartney, Ringo Starr, the beatles