"There's the fourth series being made now and there may be a fifth, but we have no plans for anything after that," the owner of Highclere, the Earl of Carnarvon tells me.

This could be a disappointment for the series' nine million viewers who may have presumed that the show's success - not least its worldwide sales - would have guaranteed it the status of such long-running TV favourites as Upstairs, Downstairs and The Forsyte Saga.

Indeed when the first programme about Lord Grantham and his family was broadcast in 2010, producer Gareth Neame said it could go on for 10 years, although its creator Julian Fellowes has since mused that he was "not sure" about taking the story beyond the Second World War. 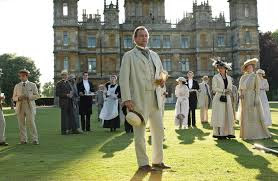 Yet while the location fees have been welcome for the upkeep of 50-bedroom Highclere, Lord Carnarvon may not be too sad if the Downton era ends.

The filming schedule has been disruptive - not so much for the peer and his wife Fiona, who live in a house in the grounds - but for the public who often find it closed for filming.

"About half the visitors we get come not for Downton but for our Egyptian history," says Lord Carnarvon, whose forebear, the 5th earl, mounted the expedition to discover Tutankhamen's tomb in 1922.