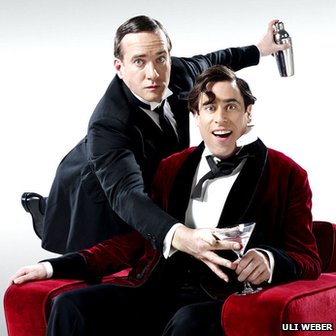 Almost a hundred years on from their first appearance in print, PG Wodehouse's comic creations Jeeves and Wooster are being resurrected on stage.

Matthew Macfadyen will play valet Jeeves with Stephen Mangan as the dim but amiable Bertie Wooster in Perfect Nonsense, by Robert and David Goodale.

Perfect Nonsense will open in Richmond and Brighton in October ahead of a West End run at the Duke of York's Theatre.

The new play, which has the blessing of the Wodehouse Estate, is based on 1938 novel The Code of the Woosters.

Mangan confessed he had never read any PG Wodehouse before he was approached about the role of the "mentally negligible" Wooster.

"It was one of those things I'd always meant to do," he said. "As everyone says, he's the finest comedy writer the English language has ever produced.

"So I started tucking in, and it's like crack cocaine. Wodehouse wrote about 90 novels and I've read about a third of them."

"This play from Bobby and David Goodale is an absolute hoot - a wonderfully crafted and joyful bit of perfect nonsense," said former Spooks star Macfadyen. "I am delighted to be a part of it."

Mangan said he wasn't daunted by Fry and Laurie's much-loved portrayals. "They were perfect casting and the TV show was brilliant, but TV and theatre are different things.

"You get a different Hamlet every seven months on the London stage, so I think we can cope with two Jeeves and Woosters in 20 years."

Perfect Nonsense plays at Richmond Theatre from 10 to 19 October and Theatre Royal Brighton from 22 to 26 October. It will then run at the Duke of York's in London from 30 October.