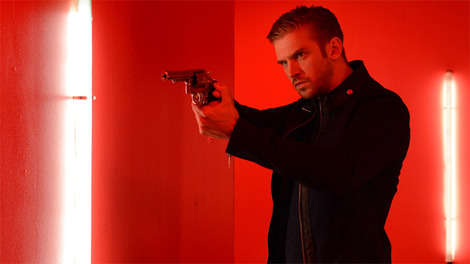 'The Guest' reportedly sees Dan Stevens portray an ex-soldier sworn to protect the family of a friend who was killed in action. Initially he seems trustworthy, and the family welcome him into their lives - but events take a horrific and darkly humourous turn.

The filmmakers pitch it as a blend of 'Halloween' and 'The Terminator.'

Speaking to Coming Soon, both the director and screenwriter acknowledged the potential problems in marketing the film, given that it hinges on what should be unexpected developments.

Barrett says, "We had the same sort of challenge on 'You're Next,' which has a lot of weird twists and reveals... we are not worried about selling this film. It's an action thriller, it's got a lot of fun moments."

Wingard continued, "The movie does have a lot of strange, offbeat elements to it, but at the end of the day it has very much a commercial appeal."

Still, Barrett acknowledges that 'The Guest' may be "in some ways more subversive" than 'You're Next.'