THEY are on-screen enemies, but Irish actor Allen Leech has lined up Downton Abbey co-star Rob James-Collier to play the lead in his directorial debut.

Killiney native Allen said that Rob would be "a nightmare" to direct in the short film Quiz Night because they were such good friends.

"I'm stealing him," the 32-year-old added. "It's a lovely little script that we decided to make. I've never tried it, and if you don't try, you don't know."

Allen's career has come a long way in the past decade. After making his breakthrough in the 2004 film Cowboys and Angels, he joined Downton Abbey in 2010 as chauffeur Tom Branson.

"When I first joined, I thought I'd be the chauffeur for a couple of episodes, and now here I am running the estate," Allen has said. 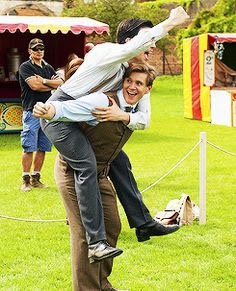 And if his character ever meets his end, he wants it to be at the hands of Rob, who plays Thomas Barrow in the ITV period drama.

"If I was going, I'd like Thomas to kill me," he said. "We could wrestle for a knife and Thomas would win."