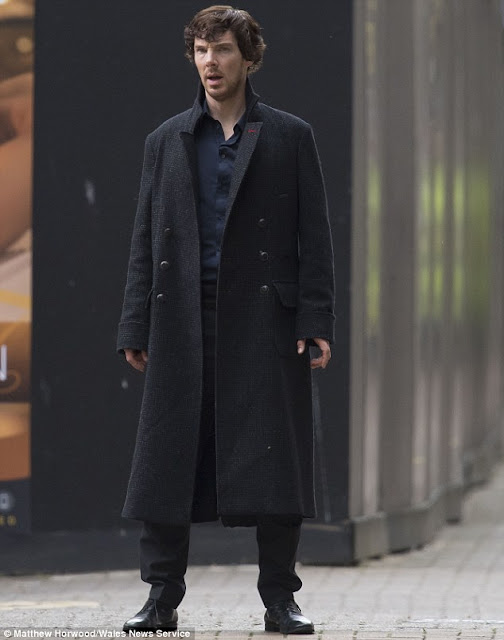 But Benedict Cumberbatch's roguish detective appeared to have lost his razor during his latest escapade, as the cast and crew of the detective drama filmed scenes in South Wales.

Shooting scenes in Cardiff City Centre, the 39-year-old actor sported a heavy layer of stubble as he filmed scenes alongside two elder gents - presumably integral to the plot of the episode. However, it seems that the latest shoot for the series sees Sherlock at his wit's end, as the appeared slightly weary and exhausted - something further emphasized by his loose stance and open-neck shirt. 'Whatever else we do, wherever we all go, all roads lead back to Baker Street - and it always feels like coming home.

'Ghosts of the past are rising in the lives of Sherlock Holmes and John Watson bringing adventure, romance and terror in their wake.

'This is the story we've been telling from the beginning. A story about to reach its climax.'
Benedict said he was 'thrilled' to be back as the detective.

He said: 'I can't wait for everyone to see season four. But you will have to wait... though not for long... And it will be worth it.'