Michael Fassbender: Trespass Against Us: another British gangster movie in which crime doesn’t pay off 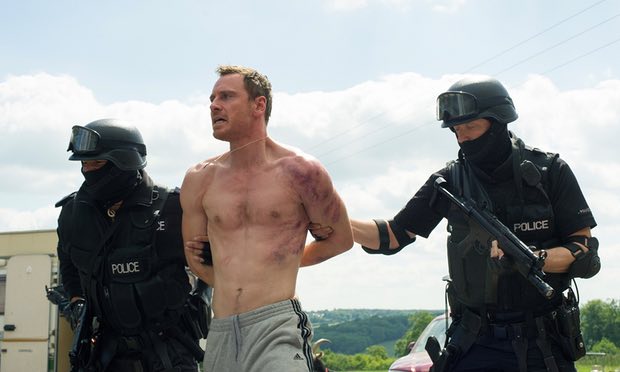 British crime movies have never been short of dysfunctional families. Think of the brothers in Get Carter, and how the survivor once impregnated his dead brother’s wife. Or the Kray twins – be they Kemps or Hardys – the mentally ill brother taking the sane one down with him, come what may, and a wife driven to suicide by their toxic relationship. Or Ray Winstone in Face, a loving dad brought to grief by his daughter’s boyfriend, a bent Met copper.

Trespass Against Us offers us the Cutlers, another screwed-up set of relations, this time a crooked father and son played by Brendan Gleeson and Michael Fassbender. But it can’t decide if it wants to be about family or about being a felon. And in a movie that sets aside a good proportion of its budget for robberies, car chases and police helicopters, this is a problem that needed resolving.

Set in rural Gloucestershire, among criminals who live in a group of caravans on waste land and call each other “jubby dim lad” and “worzel” and “ya proize div”, Trespass Against Us bets as heavily on its own milieu as Get Carter did on Newcastle upon Tyne, or Hell Is A City did with Manchester’s backstreets. But these villains are illiterate country bumpkins, and their backdrop does feel promisingly fresh. The characters go hunting and coursing, and during one getaway after robbing a posh manor, Fassbender even eludes a police chopper by hiding under a cow, something your city types like Jack Carter and Harold Shand would have balked at.

The family power struggle is about education. Fassbender’s Chad wants his son to get the schooling he never did, but his father Colby (Gleeson) constantly interferes. The movie ends up being about incompatible styles of parenting – and come on, how gangster is that? The film veers from chases and robberies back to the family conflict, which never gets out of second gear. One constantly yearns for, say, the oedipal mother fixation of White Heat or the Cain-slew-Abel dynamics of The Godfather: Part II to add an extra frisson of twisted psychological complexity.