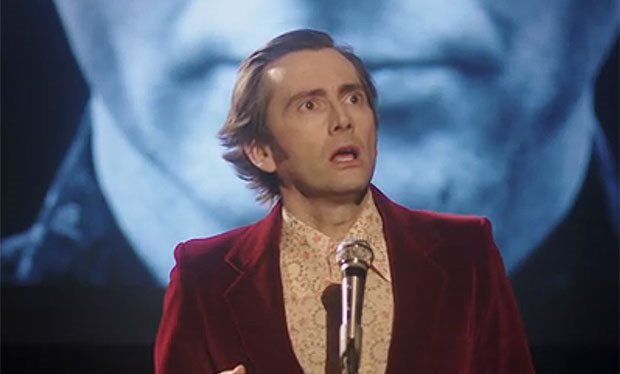 You may be used to seeing David Tennant as dour and dreary DI Hardy in Broadchurch – a man who can't even understand the simple joy in a scotch egg. But in the actor's next role, he undergoes a transformation...

Gone is the dishevelled suit and stubbly chin and in their place is a suave, clean-shaven Tennant who looks rather rock star-like as he takes the stage in new film Mad to Be Normal.

The film – released on 6th April – tells the story of the Scottish psychiatrist's life and the unique community he fostered at Kingsley Hall in east London. Flying in the face of popular psychiatric thinking of the day, Laing had his own revolutionary take on mental health treatment and became enormously popular in the 1960s and 70s.

Posted by Karen V. Wasylowski at 8:39 AM

Email ThisBlogThis!Share to TwitterShare to FacebookShare to Pinterest
Labels: broadchurch, David tennant, DI Hardy, Dr. Who, mad to be normal