PICTURED: Hayley Atwell is Edwardian chic in a brown full-length coat with patterned red scarf as she joins dapper Matthew MacFadyen on the London set of Howards End

With a black velvet hat resting atop her chestnut brown tresses, the actress got into character as she filmed with Matthew, who cut a dapper figure in a top hat and black waistcoat under a midnight blue coat.

Over the past week, they've been busy getting into character for their latest - and highly anticipated - project, which transports them back to Edwardian London.

And on Thursday, things appeared to be going swimmingly for Hayley Atwell and Matthew MacFadyen as they shot scenes along London's River Thames for the glamorous BBC adaptation of E.M. Forster's 1910 novel Howards End.

Hayley, 34, was appropriately dressed the era, stepping before cameras in a full-length brown coat, teamed with a red patterned scarf and flowing blue skirt. 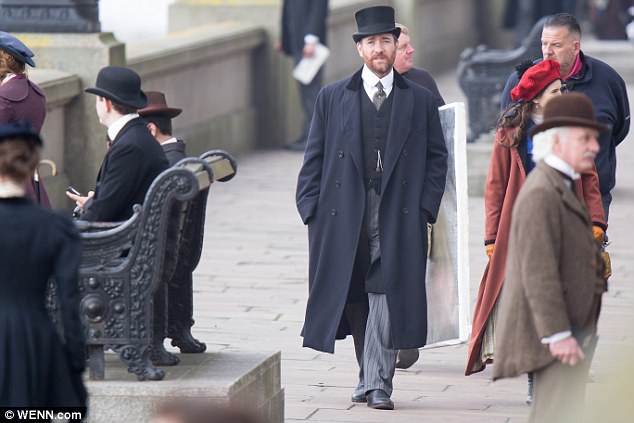 The dark TV drama - already dubbed by some as the next Downton Abbey - explores the changing landscape of social and class divisions in turn of the century England through the tales of three families.

These are the intellectual and idealistic Schlegels, the wealthy Wilcoxes from the world of business, and the working class Basts.