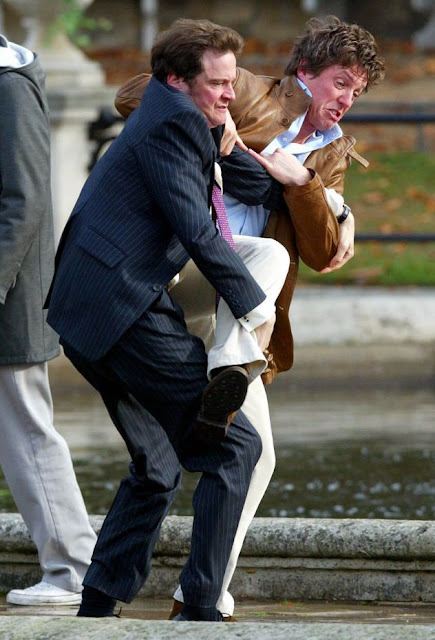 Every day until Valentine’s Day, Entertainment Weekly is celebrating our special romantic-comedy-themed Untold Stories issue. Check out all our behind-the-scenes tidbits, reunions, and oral histories — and follow #LoveEWstyle on Twitter and Instagram.
It is a truth universally acknowledged that there’s nothing more swoony or hilarious than Hugh Grant and Colin Firth having an inept fistfight over everyone’s favorite verbally incontinent spinster.
But the famous brawl in Bridget Jones’s Diary between Daniel Cleaver (Grant) and Mark Darcy (Firth) — so beloved it even earned a retread in the 2004 sequel — only came after much deliberation. “We couldn’t think of a way to bring that end-of-act-2 climax. We spent ages on it,” director Sharon Maguire recalls to EW. “[Screenwriter] Richard Curtis said, ‘In Westerns and in the old days, it would have been a fight or a duel.’ We both thought, ‘Well, that’s it.’ Middle-class men fighting — they just don’t have a clue.”
The shooting script had few specifics, merely noting that “a fight ensues.” Maguire called in a stunt coordinator to choreograph, but Firth and Grant found that rang false, since their characters wouldn’t know any fighting moves. “I said, ‘Well, what would your characters do?’” Maguire says. “Then [Hugh] said, ‘Well, he would probably just bitch-slap him.’ And Colin said, ‘I’d probably kick him in a rather ineffectual way.’”
They ditched the stunt coordinator and let Grant and Firth infuse the scene with their own feeble attempts at violence. “We shot it with lots of action shots, but really the funniest bits were just the wide shots of them bitch-slapping each other,” Maguire says with a laugh. “All of it is the comedy of humiliation, really.” No stunt doubles were required, except for the final moment when the two crash through a restaurant window. (The stunt used sugar glass and was done in one take.)