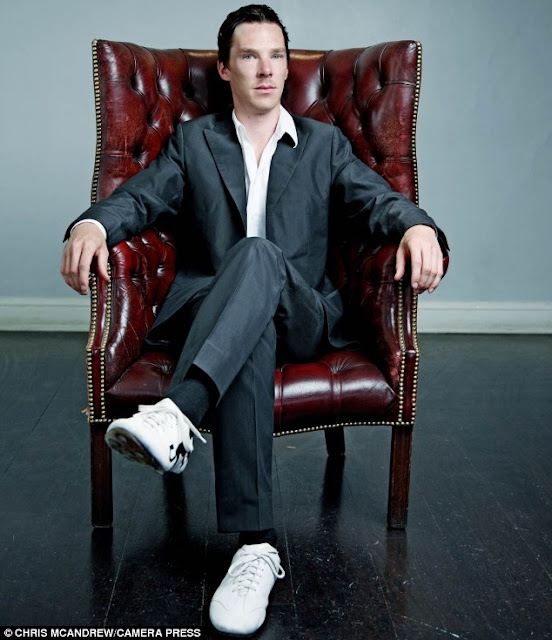 Harrow, Sherlock... and now Star Trek? The actor on his remarkable warp-speed career, the carjacking that almost killed him – and his walk-on part in London’s 7/7 bombing


Benedict Cumberbatch is staring at a video of screaming fans on his mobile phone.

The noise is ear-splitting. He passes me the phone.

‘I’ve just been to Tokyo for the first time and there were 600 fans to welcome me at the airport.’

He looks bemused, as if he’s  watching someone else’s life unfold on the tiny screen.

‘A friend said they were excited about me coming over to promote Star Trek Into Darkness and suggested I wear something nice, so I slung on my best jacket and a jazzy shirt. I’m very glad I did. It was like the Beatles arriving in America for the first time.’

Cumberbatch is fresh off the plane from Tokyo and a little disorientated when we first talk last December but still high on the experience of being treated as a star in a galaxy so far, far away from home.

During the course of three long conversations over the following months this fiercely private actor, the star of Sherlock and War Horse and now one of the biggest names in British film, gives Event his most revealing interview yet.

He talks candidly about his ongoing struggles adjusting to fame – ‘I find the level of scrutiny dulling as well as in your face and aggressive – some days I wear it lightly and other days I’m very aware of it.’

He also reveals the level of haranguing he still gets in this country for having ‘posh kid’ credentials (Cumberbatch was privately educated at Harrow).

‘Someone will always hate what I say. There’s always going to be somebody spitting blood about my wooden-faced, toffee-named, crappy acting.

‘I’ve never denied my upbringing. Talking about class terrifies me. There is no way of winning. You either come across as being arrogant and ungrateful if you complain about it, or being snooty and over-privileged if you bathe in it.

‘They say I should move to America if I don’t like the hassle. But I love London. Culturally it’s where my heart and soul are, as well as my roots. I get the variety of work here that any actor in America would die for.’