“Hugh Bonneville has a fine arse” Lara Pulver on the Sherlock effect, why she’s embracing more sex and violence in Da Vinci’s Demons and the lure of Bond 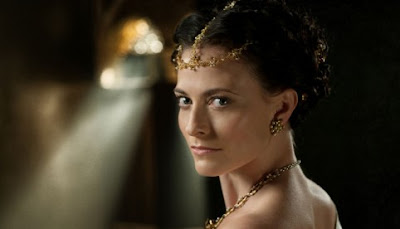 Lara, last time we spoke you had just finished Spooks and were flying back to LA when you got a call from a certain [Sherlock co-creator] Steven Moffat.

Mr Moffat. I did indeed. I wrapped Spooks then read the episode of Sherlock — A Scandal In Belgravia — on the plane back to LA. They said to me: “Come back” but I’d literally just landed so I managed to persuade them to let me tape myself in Los Angeles and send it over. I said: “Let’s use the fact that I’m eight hours behind you. You watch it and tomorrow if you still want me to fly I will wake up at 7am and I will get on the first plane.” [Laughs.] And that’s what I did.

Has it been a life-changing role?

It really has. It’s been a catapult into the big world of the industry.

Have fantasy fans been excited about you being cast in Da Vinci’s Demons from the moment it was announced?

I think David Goyer has such a loyal fan base that there has been that, but there’s been a lot of mystique about this show and what it actually is. There’s a lot of humour — dark humour as well as wit. Then there’s a childlike element. David Goyer has managed to create this mystical world where anything is possible. We’re challenging everything we thought we knew about this man — Leonardo da Vinci — and saying there’s a huge part of his history [between the ages of 18-33] that we don’t know about. So David Goyer is showing him as a Renaissance superhero.

People do also get their kit off, don’t they? Firstly Hugh Bonneville...
He stepped up.

With a fine arse.

Do you also have your moments?

I think the show isn’t unflinching in any way. Whether it’s sex, violence, religion, politics — we face everything head on. It’s bold. And yet not for one second did I feel uncomfortable with any of the subject matter. Actually it was just thought-provoking.


READ MORE: http://www.thesun.co.uk/sol/homepage/tvmagazine/celebqanda/4893789/Da-Vincis-Demons-star-Paul-OGrady-Hugh-Bonneville-has-a-fine-arse.html
Posted by Karen V. Wasylowski at 9:33 AM