Benedict Cumberbatch takes over the world Neil Simpson 1 May 2013 15:09 (THE SPECTATOR) 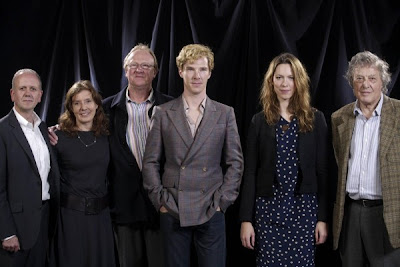 Benedict Cumberbatch at a photo call for the adaptation of Parade's End that aired last year. (NICOLAS MAETERLINCK/AFP/Getty Images)

What do you do if you wake up to discover your colleagues have told the papers you don’t deserve your job? If you’re Benedict Cumberbatch, you just stick to your Star Trek script and carry on trying to destroy the world.

Benedict was right there in the crossfire when Downton Abbey’s Rob James-Collier said actors from public schools have it easy and are sucking up all the best jobs. James-Collier (double-barrelled, but Stockport-born working class) reckons you need a rich family behind you if you’re to survive the auditions circuit and stick it out till some decent-paying jobs come along. Worse still, James-Collier isn’t sure that the rich kids make the best actors. ‘If I’d had a comfort blanket I wouldn’t have been as passionate and driven,’ he said.

Having spent the first part of this year examining all things Cumberbatch for a new Behind the Scenes biography, I’ve got to say that The Batch is about as passionate and driven as they come. Yes, he went to Harrow. Yes, Downton’s Julian Fellowes is a pal of his actor parents. Yes, he admits he’s the ultimate ‘posh bloke with a silly name’. But that’s not stopped the new Star Trek baddie from paying his dues.

Agents and casting directors I spoke to say Benedict surprises everyone by the number – and the variety – of jobs he takes on. If there’s an overlap of dates he’ll try to juggle things so he can take as many roles as possible. If there’s a choice between a holiday and a job – even something as low-paying as a Radio 4 comedy show – then he always takes the job.

Why the ferocious work ethic? It’s partly because he wants to prove himself to the world, and to his peers. It’s also because he’s terrified of being type-cast. For years the man The Sun calls ‘the brooding brainbox’ worried that he would be forever cast as ‘slightly asexual, sociopathic intellectuals’. And there are less of those on telly than you might think, especially in drama.

That’s why he still reads radio scripts and won’t rule out a return to live theatre. That’s why he is going back to Wales this year to film the third series of Sherlock – even though you might expect him to be kicking back in Hollywood. After the madness of Star Trek we’ll see him act alongside Brad Pitt, Meryl Streep and Laura Linney in a trio of big films before Christmas.

He’s certainly hoovering up a lot of great jobs. But that’s not because he had posh parents. It’s not because his posh school gave him an unfair head-start. In fact, when Harrow old-boy Andrew Birkin tried to give Benedict the lead in The Cement Garden, the teenager turned him down.