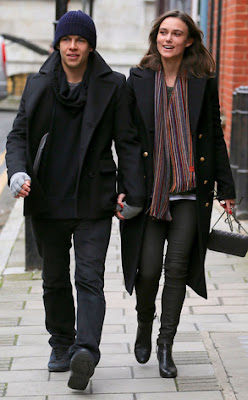 Keira Knightley and fiancé James Righton are rumored to be walking down the aisle during a European wedding ceremony in just a few days.

The cute couple was reunited earlier this week in France and were even spotted locking lips at a French airport.

So what kind of nuptials can we expect for the 28-year-old actress and her musician beau? Here's everything we know so far about the couple's rumored weekend wedding.

Knightley and her mom Sharman MacDonald arrived in France around a week ago, E! News has learned, while Righton was snapped landing down a few days ago.

According to local sources in the south of France, some sort of ceremony is taking place this weekend. Though they can't confirm that these lovebirds will be exchanging vows, they do hear there will be a wedding.

We also hear it will be a small gathering of family and friends that will be taking place at Knightley's house in the south of France or at one of the local hotels.

Posted by Karen V. Wasylowski at 9:06 AM