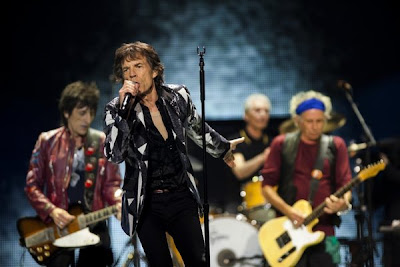 The Stones -- Jagger, Richards, Watts, Wood and a six-piece support group -- are celebrating 50 years as a band, and did so at a capacity arena with a typical combination of power, nuance and versatility.

That the group only stumbled a few times, most notably when No Doubt singer Gwen Stefani attempted to duet with Jagger on “Wild Horses,” is a testament to both the enduring power of their creations and their continued ability to deliver renegade spirit. After all, these rich men could be relaxing in mansions, going on drunken benders or -- as Richards once memorably did -- falling out of coconut trees.

They are the last band standing, let alone prancing, shaking, shimmying or prowling.


Their cockroach-like survival stands to reason. This is durable music, after all, built on solid foundations that have supported and moved entire cultures. Songs such as “Tumbling Dice,” “Miss You,” “You Can’t Always Get What You Want” and “(I Can’t Get No) Satisfaction” -- all of which they played on Friday -- have fired the neurons of billions of brains.

Or, as Richards eloquently explained in his 2010 autobiography, “Life,” the band offered repeated proof of achieving the ultimate goal of a musician: “to stretch yourself into other people’s hearts.” Richards wrote of the craft as being “almost an obsession,” adding that “to write a song that is remembered and taken to heart is a connection, a touching of bases. A thread that runs through all of us. A stab to the heart.”

The Stones stabbed hearts over and over on Friday. Among the more celebrated victims at the gig were Jack Nicholson, Eddie Murphy, Nicole Kidman and husband Keith Urban, James Caan, Babyface, Melanie Griffith and longtime Stones producer Don Was. During “Brown Sugar,” Nicholson pumped his arms like a teenager along with the other 19,000 fans.