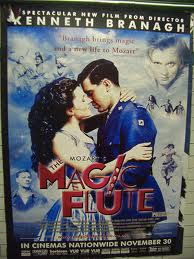 After a trip to Amsterdam in the summer of 2008, Los Angeles Times music critic Mark Swed brought back a curious souvenir: a three-disc Dutch edition of Kenneth Branagh's "The Magic Flute,” which he’d spotted in a remote record-store window.

Upon returning home, he watched the 2006 film adaptation of Mozart’s opera and was so moved that he wrote: “I am at a loss to understand why this film has been marginalized. 'Flute' is a joy.”

The Branagh film, updating the opera from 1791 to World War I, premiered at the Toronto and Venice International Film Festivals and had limited overseas runs; but it has never showed in the U.S. -- until now.

On June 9, the Branagh-directed “Flute” is scheduled to screen at about 150 Emerging Pictures theaters across the country. Encore screenings are to follow on June 11. Branagh is to take questions in a live question-and answer session with audiences, webcasted from London, following the Sunday screening.


For screening information, go to emergingpictures.com