PASADENA, Calif. – Benedict Cumberbatch has had a memorable year, including roles in five major films, but he's trying to look forward.

"You can't get too nostalgic. You can look back and go, 'That was a great year, a great moment,' but I want 2014 to be better for different reasons. I've got personal goals and all sorts of things that I want to evolve. I always have been about building a career of longevity," he says during an interview to discuss PBS' Sherlock (third-season finale, Sunday, 10 p.m. ET/PT, times may vary).

Cumberbatch's contemporary take on Sir Arthur Conan Doyle's iconic character became more personal this year, as Holmes' parents were portrayed by his mother and father — actors Wanda Ventham and Timothy Carlton. In one scene, Sherlock unceremoniously shoos them from the room when Watson arrives. 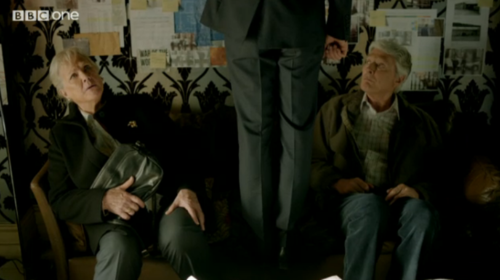 Working with his parents was "terrific. Sort of like home, really. Alarmingly so, for those who know our relationship off screen," he jokes. "It was a beautiful thing. ... It was the first day of shooting and I was nervous for them. And then I realized, now I really have to take control of this, and I just started to kind of make sure that they felt all right. And they ended up having a really good day."

He credits his parents and actors they introduced him to for his desire to pursue the same career, but there "wasn't one Saul-on-the-road-to-Damascus moment of inspiration. It was just an accumulation, really."

That has led to an accumulation of significant roles, too, for the London-born actor.

He plans to take on another real Brit, the explorer Percy Fawcett, in The Lost City of Z, a film about "this rather brilliant, rather lovely Victorian man who just became obsessed with this discovery he made in the Amazon jungle" in the early 20th Century. The melancholy Dane, Hamlet, is on the actor's schedule for fall on the London stage.

And Sunny March, the production company he started with friends just produced a short film that he appears in, Little Favour.

All of this comes on the heels of a remarkable year. Since May, he has appeared on the big screen in five major films, including an Oscar best-picture nominee,12 Years a Slave; an ensemble piece earning praise for its cast, August: Osage County; a lead role as Julian Assange in The Fifth Estate; and two blockbuster sequels, Star Trek Into Darkness and The Hobbit: The Desolation of Smaug. It can be difficult, even for a man of Cumberbatch's quick intelligence, to remember every detail.

"Five films come out and they're so different. From Khan (Trek) to Smaug to Julian Assange to Ford (Slave) to …," he says, pausing. "You see, this is the problem. I actually then start forgetting what the other role was. (Another pause.) To Little Charles in August: Osage County. And that's when it is literally an embarrassment of riches."

He credits Sherlock, which premiered in 2010, with providing a big career boost, but says he was landing roles for 2011 productions — War Horse and Tinker Tailor Soldier Spy on film and Frankenstein at the Royal National Theater in England — at about the same time with major directors who hadn't seen him play the iconic sleuth.

Sherlock has "done a lot. I won't say it's changed my life, because I had a huge break at the same time as this role first came to fruition," says Cumberbatch, substituting a sleek blue suit for Sherlock's layered look on this warm winter day. "It was a sort of perfect storm of all mediums coming together at the same time, television, film and theater, even some radio."

"I think he's capable of being aloof and dangerous and (being able to) do, with complete honesty, every beat of unlikable behavior, and yet you still like him," he says. "The other thing you have to say is he's one of the best actors alive. He's absolutely supreme."

It's nice to be able to agree with Moffat for once.