Estranged: Christian Bale with his mother Jenny and his wife Sibi

The heartbroken mum of Hollywood superstar Christian Bale today begs him to end their bitter six-year feud as he stands on the brink of Oscar glory.

Jenny, 66, has not spoken to her famous son since she and his sister Sharon fell out with him at a hotel on the eve of his Dark Knight premiere in 2008.

Police were called and the star – nominated last week for Best Actor in American Hustle – was arrested on suspicion of assault. It was claimed they rowed over money – something Jenny has always strongly denied.

Now, after years of sending her son emails in the hope he would get in touch, Jenny is desperate for a reunion before his landmark 40th birthday on Thursday. 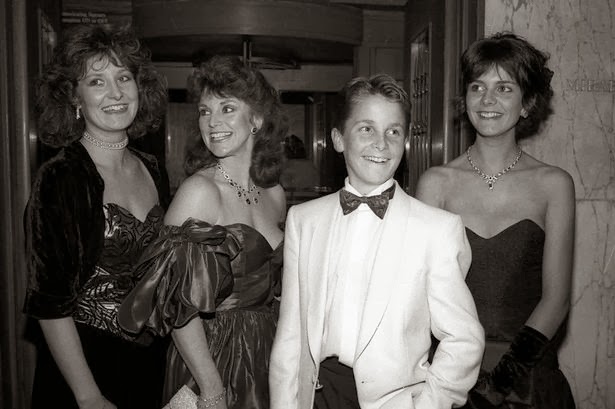 Child star: Christian aged 14 with his mum and sisters at the Empire Of The Sun premiere

Until then, watching ­Christian’s hit films – from his big break at 11 years old in Empire Of The Sun and ­American Psycho through to the Batman epics – is the only way she can ease her heartache.

“I have them all,” she says with pride. “Every one he’s made. Then sometimes Christian will come up on TV in one of his films. I’ll be flicking through the channels and suddenly there he is, looking at me from the TV. I think, ‘Oh God’ and carry on watching.”

She went to see American Hustle – in which her son plays plays a fat, balding conman with two beauties fighting over him – at her local cinema in Bournemouth last week.

“I always go to see his films. I usually go on my own, but watched American Hustle with my neighbour,”  says Jenny.