There was bound to be one, and on Hollywood's night of nights it was Benedict Cumberbatch who executed the best photobomb.

Leaping into the air arms raised and fingers splayed, the Sherlock actor cut a mischievous figure as veteran rockers U2 posed for a photo op on the red carpet ahead of their Oscars performance.

Braving the rain outside of the Dolby Theater, the Dublin based group looked dashing, with Bono taking center stage in a sharp black suit and rose coloured glasses alongside his wife of 31 years, Ali Hewson. 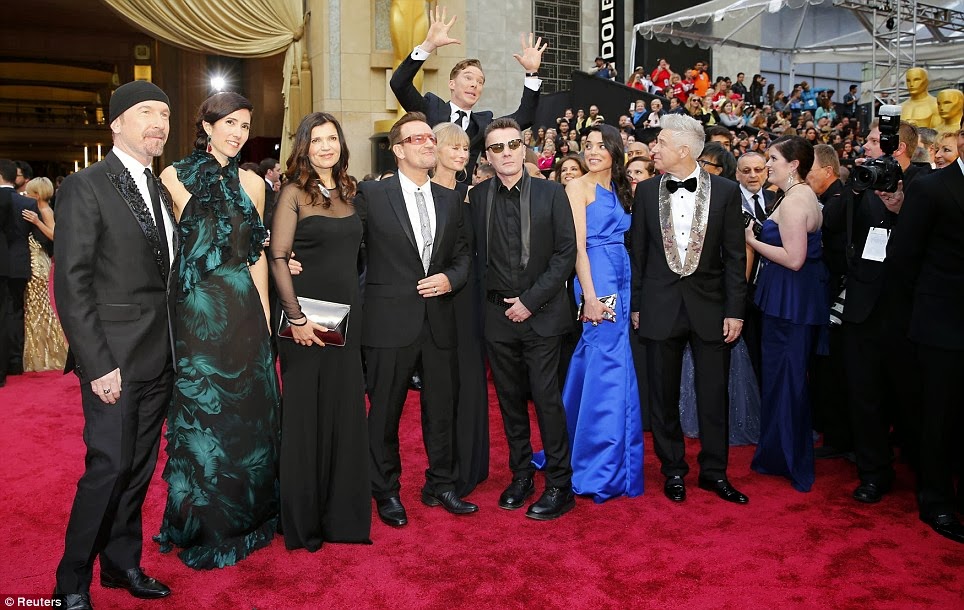 The Edge put his own spin on red carpet class, wearing his trademark beanie and an elaborately embellished jacket, white bassist Adam Clayton sported a velvet bow tie and glittering silver lapels as he gripped the hand of his Brazilian model wife, Mariana Teixeira de Carvalho.

The multi Grammy award winners received a standing ovation when they treated the A-list guests to a touching rendition of their Academy Award nominated song Ordinary Love, which features in the Weinstein Company's biopic, Mandela: Long Walk to Freedom.

Posted by Karen V. Wasylowski at 9:02 AM