What with announcing the first Monty Python live show for 24 years, and being overwhelmed by the demand – tickets for next summer’s reunion performance sold out in 43.5 seconds – Michael Palin clearly had no time to buy Helen, his wife of 47 years, a Christmas present. He says that what she really wants, though, is a Sellotape dispenser.

“My wife is very practical,” he reports with a grin.

At 70, Palin, too, has a strong claim to being down-to-earth and the sanest of all the Pythons. He still lives in the same house in north London that he’s owned for decades. He’s still married to the same girl he spotted through the window of a B&B while on holiday with his family in Southwold, Suffolk, when he was 15. And unlike John Cleese, say, who excels at invective – think of Basil Fawlty, his post-Python television incarnation – or Terry Jones, who can allegedly get very excitable off-screen (“He was once throwing chairs across the room in some Welsh sort of fury,” according to Carol Cleveland who worked with the Pythons on all their TV series), Palin rarely loses his temper.

Today, although time is tight, he chats to the waiters in the club where we meet in Soho, London, and has an amiable, cheerful air. “Terry is the nicest of the Pythons, actually, but he does get cross,” Palin confirms. “If a pint of beer is 'wrong’ or a taxi driver doesn’t know the right way, Terry will get incandescent.” Palin, for his part, can’t see the point in shouting at people. Although he did “have a wonderful blow-up” after being made to crawl through mud for the ninth take on the 1975 film Monty Python and the Holy Grail. Cleese and Graham Chapman were so surprised they applauded. “They were rather pleased to see it,” he remembers. Palin can also get tetchy, Jones maintains, if he’s hungry. “He’s quite right, I do like my regular meals.”

We’re here to talk about Palin’s latest project, a BBC documentary on the American artist Andrew Wyeth, one of a series of five such programmes he has made with Eleanor Yule and Mhairi McNeill since 1998. The project first came up for discussion around five years ago, but he was only free to make it this autumn.
Palin is quite serious about art. He goes to galleries “fairly often” and even buys the odd painting. He started collecting in 1992 with Walter Sickert’s Hat Shop in Dieppe – bought with a windfall from his television travel series Pole to Pole – liking the artist’s “dark and quite unglossy way of painting.” He also owns a William Nicholson. 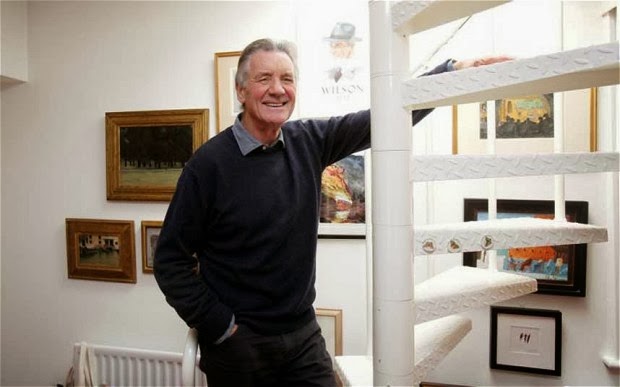 The documentary was shot over three weeks in Pennsylvania and Maine – Wyeth’s art is geographically very specific – and was, of course, not nearly as extreme as Palin’s previous television documentary adventures. For Full Circle he travelled 50,000 miles around the rim of the Pacific Ocean and was away for 10 months between 1995 and 1996. For Sahara in 2002 he slept in a refugee camp, a thatched hut and a steamy hot railway wagon.

“I wouldn’t say I seek it out,” he replies when I ask how he copes with hardship, “but there are some places which are so difficult, but worth getting to, the price you pay is discomfort. You are not going to find all creature comforts. And I’m quite a good squatter, actually, and that is important in a lot of the world.” If he’s heading for the wilderness, he always packs Grether’s Pastilles. “Very comforting when you’re bouncing along and you haven’t eaten for a long time.”


Palin grew up in Sheffield, the son of a manager in a steel works who had a terrible stammer. “He was quite cantankerous because of his stammer. He was often difficult with people, just simple things like a restaurant, he’d see as a battle ground, and maybe that has made me more obliging and less confrontational,” he says. Michael was sent to board at Shrewsbury School and from there read history at Oxford University where he met Terry Jones, who was to become his Python writing partner.