Single Benedict Cumberbatch Takes Michael Fassbender To Oscars After Party Instead Of A Girlfriend, Single ’12 Years A Slave’ Stars Have A Boys’ Night Out

Benedict Cumberbatch and his “12 Years A Slave” co-star Michael Fassbender both appear to be single, so the friends had a boys' night and partied sans girlfriends at the AGO Oscars after-party after the awards ceremony. 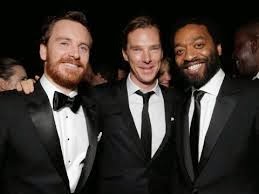 Entertainmentwise writes that Cumberbatch and Fassbender were joined at the after-party by their co-star Chiwetel Ejiofor, 36. Ejiofur brought his longtime girlfriend Sari Mercer as his Oscars date and also celebrated at the Governors Ball after-party.

After the boys’ night out, Cumberbatch was snapped leaving the AGO party with his publicist, Karon Maskill – no Oscar romance for him. Fassbender was also seen leaving the party alone, apparently single despite earlier rumors linking him to Gerard Butler’s ex-girlfriend, Madalina Ghenea.