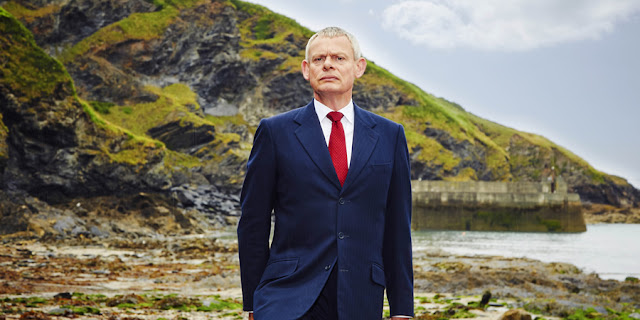 ITV has confirmed that filming has just begun on location in Port Isaac, the picturesque Cornish village which doubles as the fictional sleepy Portwenn.

All the regular members of the cast are returning to the popular series, as crews begin filming eight new episodes.

Martin Clunes reprises his role as Dr Martin Ellingham, the GP with a brusque bedside manner and a phobia of blood; with Caroline Catz playing his wife and local school headmistress, Louisa Ellingham.

After having therapy to save their marriage in the last series, they face the challenge of living happily together with their baby James Henry.

Martin Clunes says: "I'm thrilled to be back on the beautiful North Cornish coast to shoot Series 8 of Doc Martin. The Doc is as obstinate as ever, but he is trying his best to be a better husband and father."

Also returning to the series is Dame Eileen Atkins who plays the central character's formidable Aunt Ruth, a woman who is beginning to doubt the wisdom of going into business with Bert Large and his son Al.

Ian McNeice is back to play Bert Large, with Joe Absolom as Al. Bert is desperate to make his home distilled whisky a success, but there's a shortage of customers willing to buy. Meanwhile guests are not exactly flocking to Al's bed and breakfast, and he fears he will have to close the doors for good.

Meanwhile wedding bells are ringing for unlucky-in-love PC Joe Penhale, played by John Marquez. In the last series he popped the question to the Doc's nanny Janice Bone, played by Robyn Addison, and is now looking forward to marital bliss. Will the course of true love run smoothly at last for Portwenn's police officer?