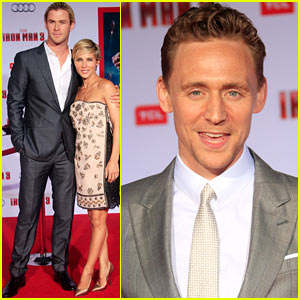 Chris Hemsworth puts his arm around his wife Elsa Pataky at the premiere of the new film Iron Man 3 held at the El Capitan Theatre on Wednesday (April 24) in Hollywood.

The 29-year-old actor was joined at the premiere by his Thor: The Dark World co-stars Tom Hiddleston and Zachary Levi.

Later in the evening, Tom was spotted having a laugh as he headed to the Iron Man 3 premiere after party.