SPOILER ALERT! Obviously, if you don’t want to know, just enjoy this picture above and go about your merry way. 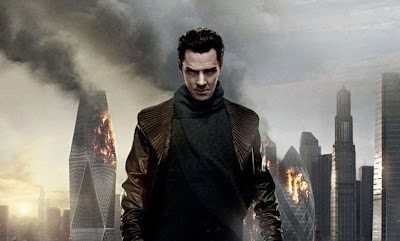 As for the rest of us, we all kind of saw this coming. Okay, maybe not kind of. Yes, Benedict Cumberbatch is playing the legendary Khan Noonien Singh, not the John Harrison character we were previously led to “believe.” Cumberbatch does actually play a John Harrison in the film, but really it’s just like the Miranda Tate pseudonym in The Dark Knight Returns.

Benedict Cumberbatch is playing Khan in Star Trek Into Darkness. All that bullshit of him not being Khan and really “John Harrison” was just a cover to hide the truth from moviegoers. Oh, he does go by “John Harrison” in the movie…but that’s not his real name. He reveals his name to Kirk later in the movie.