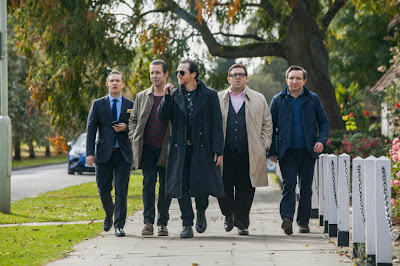 Great news UK folks, Edgar Wright has just Tweeted that ‘The World’s End’ is hitting UK cinemas on July 19th, a month earlier than its previously announced August 14th bow.  The film is the third instalment of Wright’s trilogy of comedies, following the thoroughly awesome ‘Shaun of the Dead’ (2004) and ‘Hot Fuzz’ (2007). Wright co-wrote the script for ‘The World’s End’ with Simon Pegg, who will once again star alongside Nick Frost. Joining Pegg and Frost are the likes of Martin Freeman, Paddy Considine, Eddie Marsan, and Rosamund Pike. The film is set for a August 23rd release in the US. Expect to see the trailer soon!

In ‘The World’s End,’ 20 years after attempting an epic pub crawl, five childhood friends reunite when one of them becomes hellbent on trying the drinking marathon again. They are convinced to stage an encore by mate Gary King (Simon Pegg), a 40-year-old man trapped at the cigarette end of his teens, who drags his reluctant pals to their hometown and once again attempts to reach the fabled pub – The World’s End. As they attempt to reconcile the past and present, they realise the real struggle is for the future, not just theirs but humankind’s. Reaching The World’s End is the least of their worries. The production notes for the film can be read below.