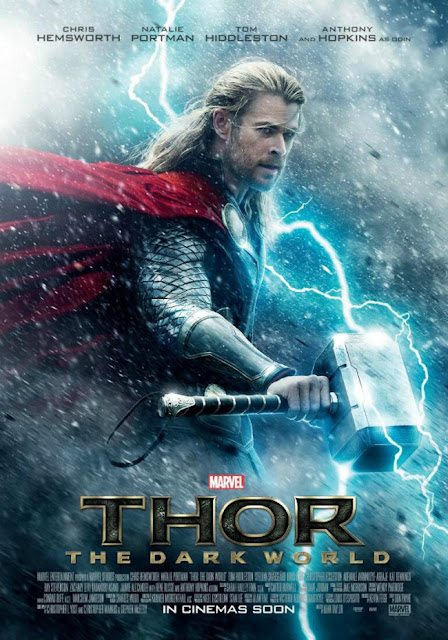 With the film’s teaser trailer set for release on April 23rd, Marvel has debuted this first poster for ‘Thor: The Dark World.’ In the sequel, the likes of Chris Hemsworth, Tom Hiddleston, Idris Elba, Ray Stevenson, Kat Dennings, Jaimie Alexander, Tadanobu Asano, Anthony Hopkins, Tom Hiddleston and Natalie Portman reprise their roles from the first film, while Zack Levi is confirmed to play Fandril, Christopher Eccleston will play the villainous Malekith The Accursed, and Adewale Akinnuoye-Agbaje will be playing Algrim the Strong and Kurse.

Set one year after ‘The Avengers,’ Thor battles to save all the Nine Realms from a mysterious enemy older than the universe itself. However, a primeval race led by Malekith, who is out for revenge, intends to descend the universe into darkness. Confronted by an enemy that even Odin and Asgard cannot overcome, Thor must reunite with Jane Foster and set out on a dangerous journey that will force him to make the ultimate sacrifice.

Alan Taylor, an accomplished TV director whose credits include ‘Game of Thrones,’ ‘Boardwalk Empire,’ ‘Mad Men,’ ‘The Sopranos’ and ‘Nurse Jackie,’ takes over directorial duties from Kenneth Branagh, who helmed the first ‘Thor’ film. Don Payne, who co-wrote the first film, penned the original draft with Robert Rodat doing the most recent polish. ‘Thor: The Dark World’ is set for a November 8th release. The official synopsis for ‘Thor: The Dark World’ can be read below.

Marvel’s “Thor: The Dark World” continues the big-screen adventures of Thor, the Mighty Avenger, as he battles to save Earth and all the Nine Realms from a shadowy enemy that predates the universe itself. In the aftermath of Marvel’s “Thor” and “Marvel’s The Avengers,” Thor fights to restore order across the cosmos…but an ancient race led by the vengeful Malekith returns to plunge the universe back into darkness. Faced with an enemy that even Odin and Asgard cannot withstand, Thor must embark on his most perilous and personal journey yet, one that will reunite him with Jane Foster and force him to sacrifice everything to save us all