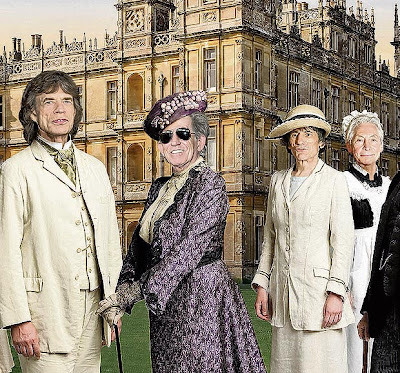 THE Rolling Stones like telly’s Downton Abbey so much they finish rehearsals early in order to watch it.

The band’s love of the period drama was revealed by Ronnie Wood to leading man Hugh Bonneville.

The pair are close friends and Hugh, who plays the Earl of Grantham, told co-star Laura Carmichael of their Sunday evening obsession.

She said: “Hugh has been hanging out with Ronnie and they have been having a great time. They met doing charity work and Ronnie told Hugh how much they loved Downton.

“Apparently they were stopping rehearsals on Sunday nights in time to get back to watch it.” Laura, 26 — Lady Edith in the hit ITV show — revealed how Mick Jagger, 69, even managed to ruin one of the storylines for Ronnie, 65.

She said: “When Sybil passed away, Mick said to Ronnie, ‘Sad to hear about the girl’. Ronnie replied, ‘I haven’t seen it yet — I recorded it.’ ”

Posted by Karen V. Wasylowski at 8:55 AM