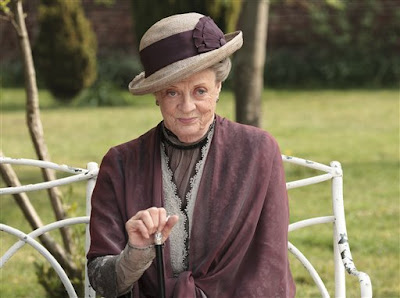 Maggie Smith as the Dowager Countess Grantham, is shown in a scene from the second season on "Downton Abbey." She told “60 Minutes” that she hasn't watched the drama because doing so would only make her agonize over her performance. She said she may watch it someday. (AP Photo/PBS, Carnival Film & Television Limited 2011 for MASTERPIECE, Nick Briggs)

Unlike the untimely death in the Season 3 finale of the popular Matthew, cut from the cast when Dan Stevens’ acting career called him elsewhere, if Smith must take a hiatus, her character will go on an extended seaside vacation.

“Downton Abbey” creator Julian Fellowes will never “run over her with a car” or close the door on her return, Eaton told a San Diego Rotary gathering. Speculation was fueled by Smith herself on a recent Today show interview when she said of Lady Grantham, “She’s gotta drop down dead at some point.”

Filming is beginning on Season 4 in England. Although it will be broadcast there this fall, Eaton said, it won’t air here until January, both so the actors will be free to promote it and due to PBS scheduling demands.

Posted by Karen V. Wasylowski at 9:36 AM