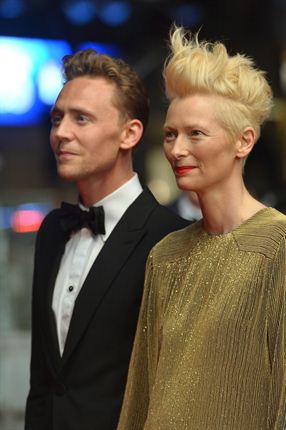 TILDA SWINTON INJECTS her own brand of otherworldly-cool into Jim Jarmusch’s latest movie Only Lovers Left Alive, an unusual comedy that puts a spin on the age-old vampire genre. The film, the last English-language entry competing for the Cannes Film Festival’s Palme d’Or, sees Swinton play Eve, a grungy but erudite vampire — who’s married to a forlorn vampire musician, Adam, played by Tom Hiddleston. Several-hundred-year-old Adam — of Biblical fame — has been living quite happily ever since being expelled from the Garden of Eden.

That is, until the 21st century came along with its excesses and greed and pushed him into a full-flung existential crisis. He cracks, and orders a wooden bullet to kill himself.

The film quirkily spruces up vampire lore. Adam and Eve are not about blood-sucking and murder — but refined lovers of literature, science, music and learning in general.

It’s not like they can just dump the bodies in the Thames with the tuberculosis sufferers like in old times, she says. Now, in the 21st century, they get their blood from the blood-transfusion section of a hospital. Alongside this, John Hurt plays a vampire Christopher Marlowe, who’s still bitter that Shakespeare became more famous.

Swinton said the film provided a unique opportunity to reinvent the vampire genre.

“There’s a feeling of beautiful luxury about approaching this kind of portrait, because you can come with a Martian’s-eye view... We were able to create our own lexicon,” she said. For instance, in the film the vampires elegantly cover their mouths and have a strange ritual with gloves that goes unexplained.

At heart, the film is the love story between Adam and Eve, who try to rekindle their love despite living in different places, he in Detroit and she in Tangiers. It is as touching as it is odd.

READ MORE: http://www.khaleejtimes.com/citytimes/inside.asp?section=citytimes&xfile=/data/citytimes/2013/May/citytimes_May180.xml
Posted by Karen V. Wasylowski at 9:47 AM