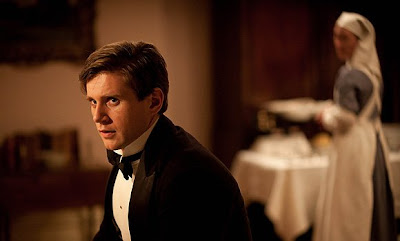 If there is one thing that the entire cast of “Downton Abbey” has to be somewhat prepared for at this point, it’s this: At almost any given point, their character may not make it through the week. Death comes often on this show, though it should be noted that it came a little more frequently during season 4 thanks largely to the fact that both Dan Stevens and Jessica Brown Findlay were each respectively leaving the show.

But this fear of his character’s death has still struck a major chord in one of the show’s actors, which has led to him taking some pretty fascinating precautions every time he opens a script for the sake of his own sanity.

In a new interview with the Daily Star, the man behind Tom Branson in Allen Leech did his part to help explain just what happens whenever a new script comes in, and he wants to make sure he still has a job at the end of it:

“Everyone does one thing when they get their scripts – makes sure their name is still in it at the end to make sure they’re still alive… Only then do you start reading it properly.

“I think everyone worries they could be written out. They’ve got to keep it exciting and dramatic. It’s a drama at the end of the day. And that’s all certainly there for the fourth series.”


READ MORE: http://cartermatt.com/64100/downton-abbey-season-4-spoilers-allen-leech-on-tom-branson-fear-of-death/
Posted by Karen V. Wasylowski at 10:05 AM