Hugh Bonneville takes wife Lulu Evans on set as he films The Monuments Men... and introduces her to silver fox George Clooney By EMILY SHERIDAN and LOUISE SAUNDERS (MAIL ON LINE) She was playing the dutiful wife by going to visit her husband, Hugh Bonneville, on the set of his latest movie The Monuments Men.

And Lulu Evans was no doubt thrilled to find herself in the company of none other than Hollywood A-lister George Clooney as the group got to work on location at the Imperial War Museum in Duxford, Cambridgeshire.

Hugh, 49, was kitted out in full army regalia as his leading lady arrived on set on Monday afternoon. 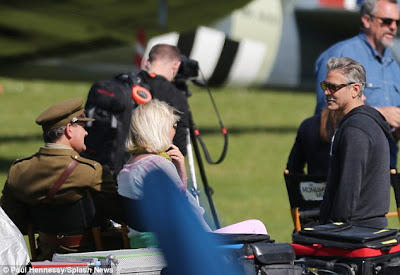 The pair seemed to be enjoying themselves as they enjoyed an arm-in-arm stroll around the picturesque countryside location while soaking up the warm afternoon sun.

But it wasn't long before something caught Lulu's eye, and the couple immediately made their way over to join silver fox Clooney in the director's chair.

The Hollywood hunk appeared to be getting on like a house on fire with Bonneville's wife, with the group chatting away together amiably as they relaxed in the sunshine. 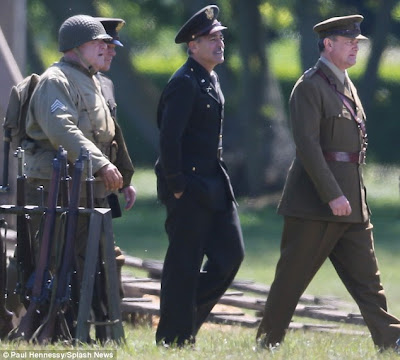