AVENGERS star and thespian Tom Hiddleston is taking on yet another of the Bard's best roles in the upcoming Donmar Warehouse production of William Shakespeare's CORIOLANUS and the popular personality has taken to Twitter to share some quotes and a first look at the poster for the highly anticipated new production.

A bare-chested Hiddleston is strewn with plasma as the grisly background depicts further streaks of ribboning plasma juxtaposed with stark white.

Also, Hiddleston took to Twitter to share his enthusiasm for the project, as well, writing, "Coriolanus. Broadcast live from @DonmarWarehouse to cinemas around the world. January 30, 2014. @ntlive http://say.ly/Vui62qW" 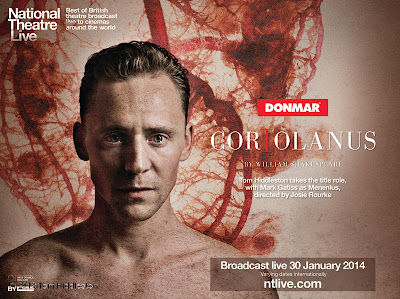 Hiddleston will take on the title role in the war-themed tragedy at the Donmar Warehouse in London's West End, running December 6 through February 8.

The production will be directed by Josie Rourke. Tickets go on sale June 25.