THE BACKLOT
by Michael Cornelius | February 2, 2014

Our scene opens with Daisy, flitting about happily and slipping Alfred some hot buttered toast in hopes of putting a smile on our poor Gloomy Ging’s face. Daisy is thrilled that Alfred didn’t land the Ritz gig and will be staying at Downton, especially since Jimmy is putting the moves on Ivy hot and heavy now. To quote a wise American philosopher: “Default. The two greatest words in the English language.” Daisy figures that, given enough time (and, apparently, toast,) Alfred will come around and eventually settle for her. Hey, nothing is more romantic than being reminded that he “settled” for you every time your anniversary rolls around.

But not so fast Daisy! Alfred gets a timely letter—one of the individuals selected for the Ritz program has dropped out, and now Alfred is in. Why, it’s true—sometimes the first runner-up really does get to be Miss America! Alfred dons his sash and his tiara (fabulous!) and gives a touching “thank you” speech to the family where he calls Carson a “kind and generous” teacher. Damn, SuperGing, I think he might have wrung an emotion out of Carson’ face! 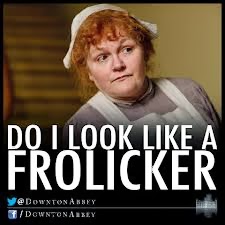 Ivy is happy for Alfred to leave because Jimmy is taking her to see a Rudolph Valentino movie. We learn that Valentino gives Mrs. Patmore “the shivers”. On the way home from the picture, Jimmy and Ivy stop to sit on a bench to admire the moon. Ivy’s down with a smooch or two, but fast Jimmy wants to inspect her uvula from the inside out. He also gets a bit handsy and “up-the-skirty” and Ivy puts a quick end to all that. Suddenly Jimmy’s fabulous hair and “devil-may-care” attitude melt away and Ivy realizes that he’s just a douchebag. She storms off and gets consoled by Mrs. Patmore and Mrs. Hughes, who have each before tangled with the cad that is man (suddenly imagining either of them tangling with a man confirms my homosexuality big time.) Ivy realizes that maybe Alfred was the better man all along and this causes Daisy to blow her biscuits and holler at Ivy that if she had been nicer to Alfred from the get-go, maybe he would not have left Downton. Of course, if Ivy was seeing Alfred then Daisy would never get a chance to be with him. Confusing much? I guess this is the same logic that causes tween girls to “heart” little twerps like Justin Bieber. To the rest of us, it will never make sense.

Alfred proffers Daisy a poignant good-bye, and she sincerely wishes him well. Then SuperGing strolls out the door and out of our lives. We’ll miss you, Alfred; now go find a television show where you have to walk around in your underwear. A lot.

Baxter is still acting as Thomas’ eyes and ears around Downton. She doesn’t like spying for him because Lady Grantham is generally a good employer, but she does it because of whatever secret Thomas is holding over her. Dear Julian Fellowes: I am not interested in this plot line. Not one smidge. I am more interested in Thomas having a torrid affair with an undergardener named Scudder who lives two manors over. Please get to work on that ASAP. Oh, and in case you are unsure what that acronym means here across the pond, ASAP stands for “before we gays stop watching your show.” Because let me tell you, if we stop watching it, and it doesn’t have country music or tractor pulls or guys with long beards that probably contain live waterfowl, it ceases to exist (isn’t that right, American Idol?)

By the way, does anyone else realize that Thomas has not had sex in ten years? The show opened in 1912 and Thomas’ affair with the Duke of Whatever had soured (“Summer lovin’, had me a blast, / Summer lovin’, You’re not the right class,”) and it is now 1922 and the closest Thomas has come to actual sexual relations with another man is getting shot in his masturbation hand and/or punched and kicked repeatedly in the stomach. I don’t know about you, but I’m not exactly getting any tingles from that action. At least this explains why he is so surly all the time.