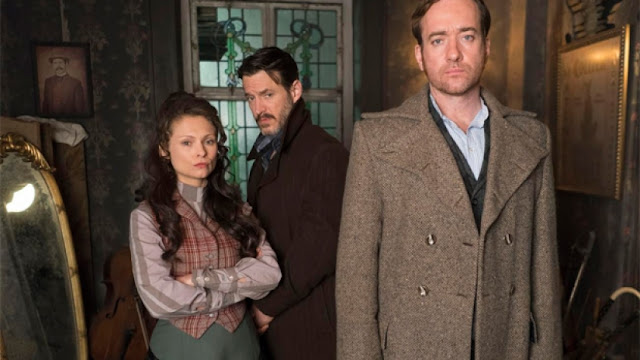 The fifth and final series of Ripper Street starts a mere three days after the final events of the fourth series, opening with the funeral of Bennett Drake. Reid (Matthew Macfadyen), Jackson (Adam Rothenberg), and Susan (MyAnna Buring) remain hidden in the sewers, still reeling from Drake’s death at the hands of the feral Nathaniel (Jonas Armstrong). Nathaniel’s brother, Augustus Dove (Killian Scott) sets about covering up his own actions as well as his sibling’s. To aid this, he brings back an old Whitechapel nemesis, Jedediah Shine (Joseph Mawle), last seen beaten into submission by Drake, as the new Chief of H division and commands him to track down Reid.

The fourth series’ climactic scenes were designed to shatter the status quo that was the investigative team of Lehman Street. Even when the relationship between Reid, Drake, and Jackson was fractious, they were united in their common desire to clean up the streets of Whitechapel by whatever means necessary. Losing Drake, and therefore the strong presence of Jerome Flynn, is a risk to the established dynamic of the show as the chemistry of the three central characters was often its strongest element.

How the series manages without Flynn in the longer term of course remains to be seen, but there is enough intrigue in this first episode that Drake’s loss is felt solely on an emotional level, rather than in Closed Casket’s construction. Time is spent with protagonists and antagonists alike, all of whom deal with Drake’s death in different ways. Though her scenes are brief, Charlene McKenna’s performance is heart-wrenching as the grief of losing her husband overcomes Rose and she runs away from her home. Macfadyen and Rothenberg are as reliable as ever, stoic and focused in their ambition to avenge their friend.

The episode itself reflects that stoicism; aside from Rose and Matilda’s respective scenes and a short moment in which Susan catches sight of Connor outside Dove’s home, the emotions are somewhat downplayed. There’s a new, more sombre version of the theme tune, befitting the mournful turn of events and used to establish the quieter tone that the episode goes for. It works well, particularly in the more sinister moments, such as Dove sweeping Connor into his arms, or Matilda coming face to face with an old foe of her father’s. When the heightened, emotional scenes do come, the contrast helps them land more effectively.