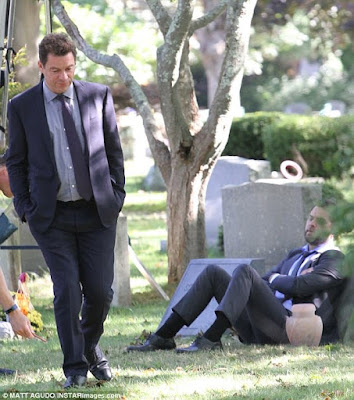 They explore the emotional effects of extramarital relationships as co-stars on Showtime's hit television show The Affair.

And Joshua Jackson, 39, and Dominic West, 47, were spotted getting right back into the swing of things while filming scenes for the fourth season of the show in New York on Wednesday afternoon.

The actors appeared to be shooting a somber funeral scene in the East Hampton area as Jackson rested against a tombstone.

The actors seemed to be filming in a graveyard and were surrounded by an abundance of greenery, flowers and headstones.

In The Affair, the pair play the significant others of lead characters Noah and Alison (portrayed by British actors Dominic West and Ruth Wilson), who are having an affair.

The Dawsons Creek star took a quick break from filming to grab a light snack as he walked through the set.

Showtime picked up the drama for a fourth season in January, but has yet to share the release date as filming began in early September