Benedict Cumberbatch: Who Is Getting Married In Sherlock? (E.) BY CLAIRE RUTTER ON APRIL 22, 2013 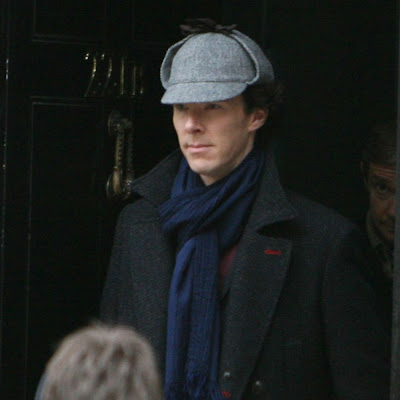 In a bid to distract us from wondering how Benedict Cumberbatch’s Sherlock Holmes will return from the dead, a producer from the hit BBC show has hinted that wedding bells could be heard in the new series.

Actors Benedict Cumberbatch and Martin Freeman have been recording scenes for the upcoming series, and now producer Sue Vertue has given one of the biggest hints about the show so far.

Tweeting a photo of what looks like a place setting for Sherlock Holmes, Vertue wrote: "Lovely day for a wedding #sherlock."


The new picture adds fuel to the speculation that there will be a wedding, but who will be tying the knot?

Sherlock creators Stephen Moffat and Mark Gatiss have previously given a three-word teaser for the new series – “wedding”, “rat”, and “bow”.

While some were hoping that this would be clues on how to solve the mystery of Sherlock’s ‘resurrection’, it looks as though they could be about a totally different part of the series.

Um, anyone read the actual Conan Doyle books? Who gets married when Sherlock returns??